An atrial septal defect is a defect (a hole) in the septum (the wall) between the two atria. This connects the right and left atria allowing blood to flow between them.

During the development of the fetus the left and right atria are connected. Two walls grow downwards from the top of the heart, then fuse together with the endocardial cushion in the middle of the heart to separate the atria. These two walls are called the septum primum and septum secondum.

Defects this these two walls lead to atrial septal defects, a hole connecting the left and right atria. There is a small hole in the septum secondum called the foramen ovale. The foramen ovale normally closes at birth.

An atrial septal defect leads to a shunt, with blood moving between the two atria. Blood moves from the left atrium to the right atrium because the pressure in the left atrium is higher than the pressure in the right atrium. This means blood continues to flow to the pulmonary vessels and lungs to get oxygenated and the patient does not become cyanotic, however the increased flow to the right side of the heart leads to right sided overload and right heart strain. This right sided overload can lead to right heart failure and pulmonary hypertension.

Eventually pulmonary hypertension can lead to Eisenmenger syndrome. This is where the pulmonary pressure is greater than the systemic pressure, the shunt reverses and forms a right to left shunt across the ASD, blood bypasses the lungs and the patient becomes cyanotic. 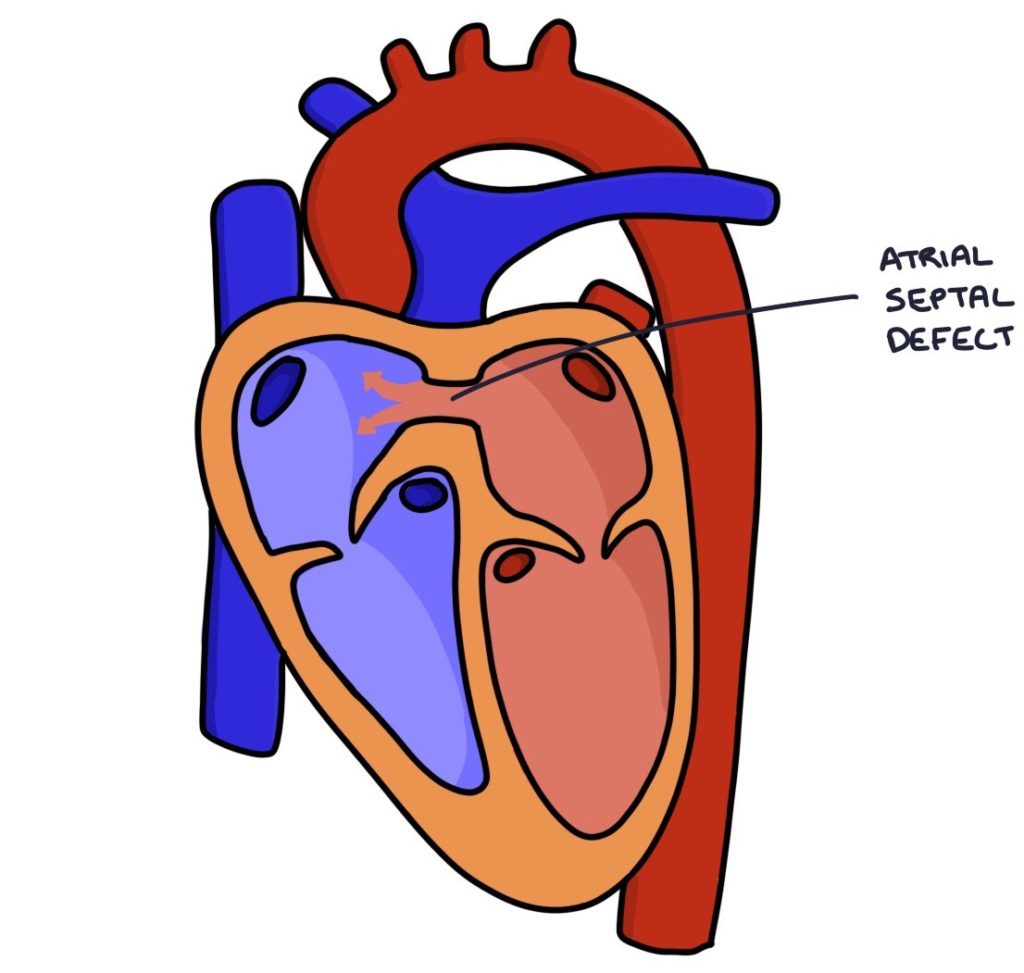 The types of atrial septal defect from most to least common are:

TOM TIP: It is worth remembering atrial septal defects as a cause of stroke in patients with a DVT. Normally when patients have a DVT and this becomes an embolus, the clot travels to the right side of the heart, enters the lungs and becomes a pulmonary embolism. In patients with an ASD the clot is able to travel from the right atrium to the left atrium across the ASD. This means the clot can travel to the left ventricle, aorta and up to the brain, causing a large stroke. An exam question may feature a patient with a DVT that develops a large stroke and the challenge is to identify that they have had a lifelong asymptomatic ASD.

ASDs cause a mid-systolic, crescendo-decrescendo murmur loudest at the upper left sternal border with a fixed split second heart sound. Splitting of the second heart sound is where you hear the closure of the aortic and pulmonary valves at slightly different times. This can be normal with inspiration, however a “fixed split” second heart sound means the split does not change with inspiration or expiration. This occurs in an atrial septal defect because blood is flowing from the left atrium into the right atrium across the atrial septal defect, increasing the volume of blood that the right ventricle has to empty before the pulmonary valve can close. This doesn’t vary with respiration.

Atrial septal defects are often picked up through antenatal scans or newborn examinations. It may be asymptomatic in childhood and present in adulthood with dyspnoea, heart failure or stroke. Typical symptoms in childhood are:

Interestingly, there is a possible link between migraine with aura and patent foramen ovale. Trials such as the PREMIUM trial found that treating the PFO did not have a significant effect on the migraines, and screening people with migraines for a PFO or treating a PFO to help migraines is not currently recommended.

Patients with an ASD should be referred to a paediatric cardiologist for ongoing management. If the ASD is small and asymptomatic, watching and waiting can be appropriate. ASDs can be corrected surgically using a transvenous catheter closure (via the femoral vein) or open heart surgery. Anticoagulants (such as aspirin, warfarin and NOACs) are used to reduce the risk of clots and stroke in adults.