The body goes through a large number of changes during pregnancy. You will come across pregnant women with a high heart rate, low blood pressure, abnormal blood test results and skin changes. It helps to know what changes are normal in healthy pregnant women and when to investigate further for underlying disease. 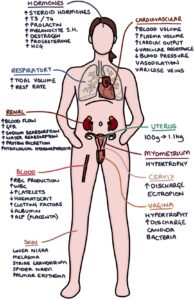 Higher ACTH levels cause a rise in steroid hormones, particularly cortisol and aldosterone. Higher steroid levels lead to an improvement in most autoimmune conditions and a susceptibility to diabetes and infections.

Increased melanocyte stimulating hormone causes increased pigmentation of the skin during pregnancy, resulting in skin changes such as linea nigra and melasma.

HCG levels rise, roughly doubling every 48 hours until they plateau around 8 – 12 weeks, then gradually start to fall.

Progesterone levels rise throughout pregnancy. Progesterone acts to maintain the pregnancy, prevent contractions and suppress the mother’s immune reaction to fetal antigens. The corpus luteum produces progesterone until ten weeks gestation. The placenta produces it during the remainder of the pregnancy.

Oestrogen rises throughout pregnancy, produced by the placenta.

Changes to the Uterus, Cervix and Vagina

The size of the uterus increases from around 100g to 1.1kg during pregnancy. There is hypertrophy of the myometrium and the blood vessels in the uterus. Increased oestrogen may cause cervical ectropion and increased cervical discharge. Oestrogen also causes hypertrophy of the vaginal muscles and increased vaginal discharge. The changes in the vagina prepare it for delivery, however they make bacterial and candidal infection (thrush) more common.

Before delivery, prostaglandins break down collagen in the cervix, allowing it to dilate and efface during childbirth.

There are several cardiovascular changes during pregnancy:

A number of changes in the kidneys happen during pregnancy:

Clotting factors such as fibrinogen and factor VII, VIII and X increase in pregnancy, making women hyper-coagulable. This increases the risk of venous thromboembolism (blood clots developing in the veins). Pregnant women are more likely to develop deep vein thrombosis and pulmonary embolism.

There are a few other changes you may find on blood results:

Several changes to skin are normal in pregnancy: