Primordial follicles each contain a primary oocyte. The oocytes are the germ cells (first generation of sex cell) that eventually undergo meiosis to become the mature ovum, ready for fertilisation. They contain the full 46 chromosomes. These primordial follicles and oocytes spend the majority of their lives in a resting state inside the ovaries, waiting for their time to develop. The primary oocyte is contained within the pregranulosa cells, surrounded by the outer basal lamina layer.

Development of the Primary Follicle

The granulosa cells secrete the material that becomes the zona pellucida. They also secrete oestrogen.

Development of the Secondary Follicle

Development of the Antral Follicles

With further development, the secondary follicle develops a single large fluid-filled area within the granulosa cells called the antrum. Antrum refers to a natural chamber within a structure. This is the antral follicle stage. This antrum fills with increasing amounts of fluid, making the follicle expand rapidly. The corona radiata is made of granulosa cells, and surrounds the zona pellucida and the oocyte. 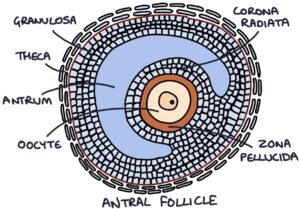 When there is a surge of luteinising hormone (LH) from the pituitary, it causes the smooth muscle of the theca externa to squeeze, and the follicle to burst. Follicular cells also release digestive enzymes that puncture a hole in the wall of the ovary, allowing the ovum to pass escape. The oocyte is released into the area surrounding the ovary. At this point, it is floating in the peritoneal cavity, but it is quickly swept up by the fimbriae of the fallopian tubes. 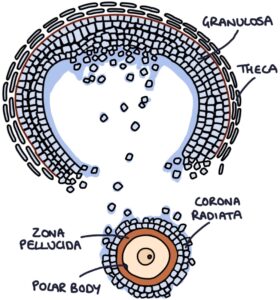 The leftover parts of the follicle collapse and turn a yellow colour. The collapsed follicle becomes the corpus luteum. The cells of the granulosa and theca interna become luteal cells. Luteal cells secrete steroid hormones, most notably progesterone. The corpus luteum  persists in response to human chorionic gonadotropin (HCG) from a fertilised blastocyst when pregnancy occurs. When fertilisation does not occur, the corpus luteum degenerates after 10 to 14 days.

Just before and around the time of ovulation, the primary oocyte undergoes meiosis. This process splits the full 46 chromosomes in the oocyte (a diploid cell) into two, leaving only 23 chromosomes (a haploid cell). The other 23 chromosomes float off to the side and become something called a polar body. It is then a secondary oocyte.

The female egg (ovum) at this stage still has the surrounding layers from its  time in the follicle. In the middle is the oocyte with the first polar body, surrounded by the zona pellucida and the granulosa cells that make up the corona radiata. 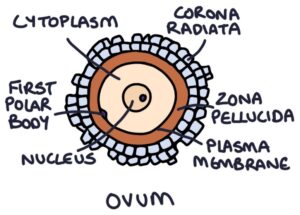 When sperm from the male enter the fallopian tube via the vagina and uterus, they will attempt to penetrate the corona radiata and zona pellucida to fertilise the egg. Usually, only one sperm will get through before the surrounding layers shut the other sperm out.

Development of the Blastocyst 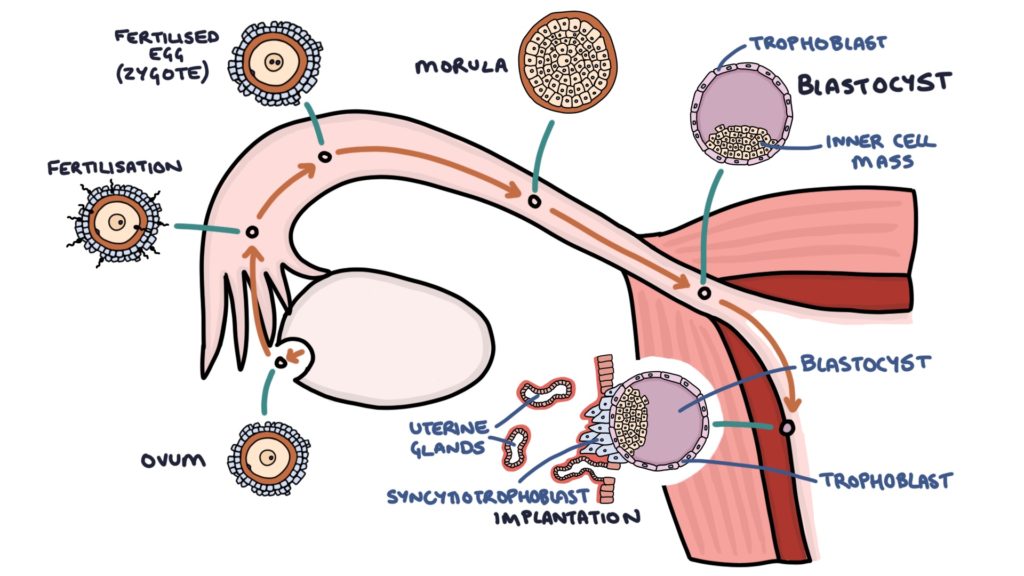 The cells of the stroma convert into a tissue called decidua that is specialised in providing nutrients to the trophoblast. When the blastocyst implants on the endometrium, the syncytiotrophoblast starts to produce human chorionic gonadotropin (HCG). This HCG is very important for maintaining the corpus luteum in the ovary, allowing it to continue producing progesterone and oestrogen.