Fibroids are benign tumours of the smooth muscle of the uterus. They are also called uterine leiomyomas. They are very common, affecting 40-60% of women in later reproductive years, and are more common in black women compared with other ethnic groups. They are oestrogen sensitive, meaning they grow in response to oestrogen. 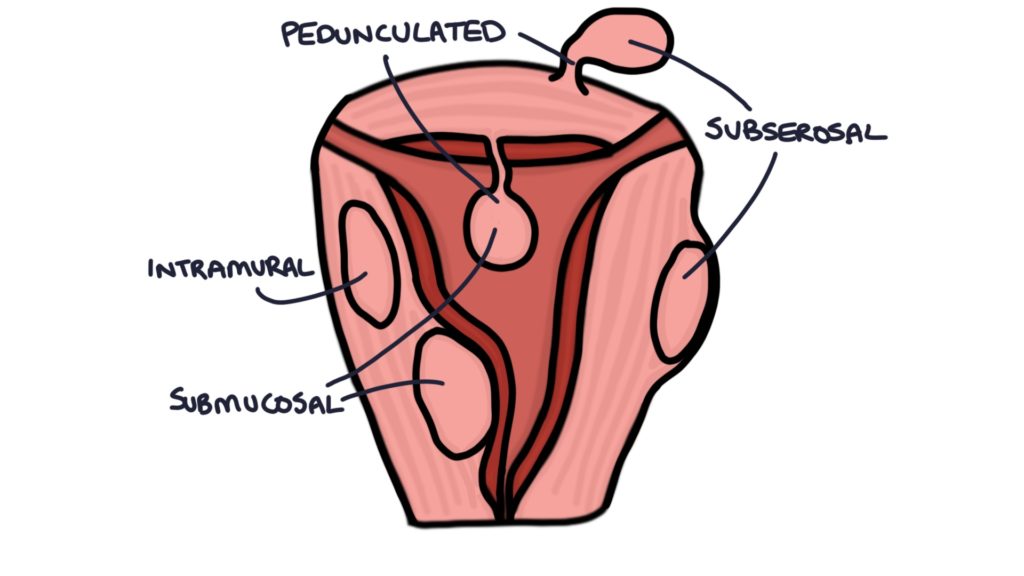 Fibroids are often asymptomatic. They can present in several ways:

Abdominal and bimanual examination may reveal a palpable pelvic mass or an enlarged firm non-tender uterus.

Hysteroscopy is the initial investigation for submucosal fibroids presenting with heavy menstrual bleeding.

Pelvic ultrasound is the investigation of choice for larger fibroids.

MRI scanning may be considered before surgical options, where more information is needed about the size, shape and blood supply of the fibroids.

NICE guidelines on fibroids are included within the heavy menstrual bleeding guideline from 2018.

For fibroids less than 3 cm, the medical management is the same as with heavy menstrual bleeding:

For fibroids more than 3 cm, women need referral to gynaecology for investigation and management. Medical management options are:

Surgical options for larger fibroids are:

GnRH agonists, such as goserelin (Zoladex) or leuprorelin (Prostap), may be used to reduce the size of fibroids before surgery. They work by inducing a menopause-like state and reducing the amount of oestrogen maintaining the fibroid. Usually, GnRH agonists are only used short term, for example, to shrink a fibroid before myomectomy.

Uterine artery embolisation is a surgical option for larger fibroids, performed by interventional radiologists. The radiologist inserts a catheter into an artery, usually the femoral artery. This catheter is passed through to the uterine artery under X-ray guidance. Once in the correct place, particles are injected that cause a blockage in the arterial supply to the fibroid. This starves the fibroid of oxygen and causes it to shrink.

Myomectomy involves surgically removing the fibroid via laparoscopic (keyhole) surgery or laparotomy (open surgery). Myomectomy is the only treatment known to potentially improve fertility in patients with fibroids.

Endometrial ablation can be used to destroy the endometrium. Second generation, non-hysteroscopic techniques are used, such as balloon thermal ablation. This involves inserting a specially designed balloon into the endometrial cavity and filling it with high-temperature fluid that burns the endometrial lining of the uterus.

Hysterectomy involves removing the uterus and fibroids. Hysterectomy may be by laparoscopy (keyhole surgery), laparotomy or vaginal approach. The ovaries may be removed or left depending on patient preference, risks and benefits.

There are several potential complications of fibroids:

TOM TIP: Look out for the pregnant woman with a history of fibroids presenting with severe abdominal pain and a low-grade fever in your exams. The diagnosis is likely to be red degeneration.