Systemic lupus erythematosus (“lupus”) is an inflammatory autoimmune connective tissue disease. It is “systemic” because it affects multiple organs and systems and “erythematosus” refers to the typical red malar rash that occurs across the face. It presents with varying and non-specific symptoms. It is more common in women and Asians and usually presents in young to middle aged adults but can present later in life.

It often takes a relapsing-remitting course, with flares and periods where symptoms are improved. The result of chronic inflammation means patients with lupus often have shortened life expectancy. Cardiovascular disease and infection are leading causes of death.

SLE is characterised by anti-nuclear antibodies. These are antibodies to proteins within the persons own cell nucleus. This causes the immune system to target theses proteins. When the immune system is activated by these antibodies targeting proteins in the cell nucleus it generates an inflammatory response. Inflammation in the body leads to the symptoms of the condition. Usually, inflammation is a helpful response when fighting off an infection however it creates numerous problems when it occurs chronically and against the tissues of the body. 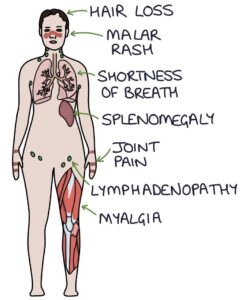 SLE is associated with anti-nuclear antibodies (ANA). These are antibodies against normal proteins in the cell nucleus. Around 85% of patients with SLE will be positive for ANA. Performing an ANA blood test is the initial step in testing for SLE in someone with symptoms of the condition. Antinuclear antibodies can be positive in healthy patients and patients with other autoimmune conditions (e.g. autoimmune hepatitis). Therefore, a positive result needs to be interpreted in the context of their symptoms.

Antiphospholipid antibodies and antiphospholipid syndrome can occur secondary to SLE. They can occur in up to 40% of patients with SLE and are associated with an increased risk of venous thromboembolism.

You can use the SLICC Criteria or the ACR Criteria for establishing a diagnosis. This involves confirming the presence of antinuclear antibodies and establishing a certain number of clinical features suggestive of SLE.

Systemic lupus erythematosus affects many of the organs in the body. These effects are related to chronic inflammation.

Cardiovascular disease is a leading cause of death. Chronic inflammation in the blood vessels leads to hypertension and coronary artery disease.

Infection is more common in patients with SLE as part of the disease process and secondary to immunosuppressants.

Pericarditis is inflammation in the fluid filled sac around the heart. It causes sharp chest pain worse on lying flat.

Pleuritis is inflammation of the pleural lining of the lungs. This is also called pleurisy. It causes typical symptoms of sharp chest pain on inspiration.

Interstitial lung disease can be caused by inflammation in the lung tissue. This leads to pulmonary fibrosis.

Lupus nephritis occurs due to inflammation in the kidney. It can progress to end-stage renal failure. It is assessed urine protein:creatinine ratio and renal biopsy. The renal biopsy is often repeated to assess response to treatment.

Recurrent miscarriage is common in systemic lupus erythematosus. It is associated with other pregnancy complications such as intrauterine growth restriction, pre-eclampsia and pre-term labour.

As with most autoimmune conditions anti-inflammatory medication and immunosuppression is the mainstay of treatment. There is no cure and the aim is to reduce symptoms and complications. It will be guided by a rheumatology specialist. Treatment is usually titrated upwards to find the minimal medication with the least side effects required to control the symptoms.

Other commonly used immunosuppressants in resistant or more severe lupus:

Biological therapies are considered for patients with severe disease or where patients have not responded to other treatments. The main options in SLE are: