Antiphospholipid syndrome is a disorder associated with antiphospholipid antibodies where the blood becomes prone to clotting. The patient is in a hyper-coagulable state. The main associations are with thrombosis and complications in pregnancy, particularly recurrent miscarriage.

Antiphospholipid syndrome can occur on its own or secondary to an autoimmune condition, particularly systemic lupus erythematosus.

It is associated with antiphospholipid antibodies:

These antibodies interfere with coagulation and create a hypercoagulable state where the blood is more prone to clotting. 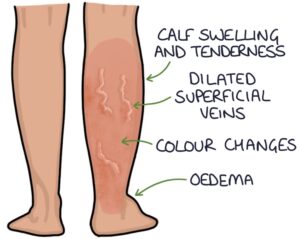 Livedo reticularis is a purple lace like rash that gives a mottled appearance to the skin.

Libmann-Sacks endocarditis is a type of non-bacterial endocarditis where there are growths (vegetations) on the valves of the heart. The mitral valve is most commonly affected. It is associated with SLE and antiphospholipid syndrome.

Diagnosis is made when there is a history of thrombosis or pregnancy complication plus persistent antibodies:

Patients are usually managed jointly between rheumatology, haematology and obstetrics (if pregnant).

Long term warfarin with an INR range of 2-3 is used to prevent thrombosis (3-4 may be used with recurrent thrombosis).

Pregnant women are started on low molecular weight heparin (e.g. enoxaparin) plus aspirin to reduce the risk of pregnancy complications. Warfarin is contraindicated in pregnancy.