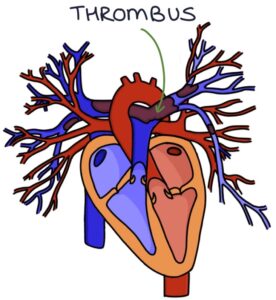 There are a number of factors for developing a DVT or PE. In many of these situations we give patients prophylactic treatment with low molecular weight heparin to reduce the risk.

TOM TIP: In your exams when a patient is presenting with possible features of a DVT or PE, ask about risk factors such as periods of immobility, surgery and long haul flights to score extra points from your examiners.

Every patient admitted to hospital should be assessed for their risk of venous thromboembolism (VTE). If they at increased risk of VTE they should receive prophylaxis with a low molecular weight heparin such as enoxaparin unless contraindicated. Contraindications include active bleeding or existing anticoagulation with warfarin or a NOAC. Anti-embolic compression stockings are also used unless contraindicated. The main contraindication for compression stockings is significant peripheral arterial disease.

Pulmonary embolism can present with subtle signs and symptoms. In patients with potential features of a PE, risk factors for PE and no other explanation for their symptoms have a low threshold for suspecting a PE. Presenting features include:

There may also be signs and symptoms of a deep vein thrombosis such as unilateral leg swelling and tenderness.

The Wells score predicts the risk of a patient presenting with symptoms actually having a DVT or pulmonary embolism. It takes in to account risk factors such as recent surgery and clinical findings such as tachycardia (heart rate >100) and haemoptysis.

NICE recommend assessing for alternative causes with a:

Perform a Wells score and proceed based on the outcome:

CT pulmonary angiogram (CTPA) involves a chest CT scan with an intravenous contrast that highlights the pulmonary arteries to demonstrate any blood clots. This is usually the first choice for investigating a pulmonary embolism as it tends to be more readily available, provides a more definitive assessment and gives information about alternative diagnoses such as pneumonia or malignancy.

Ventilation-perfusion (VQ) scan involves using radioactive isotopes and a gamma camera to compare the ventilation with the perfusion of the lungs. They are used in patients with renal impairment, contrast allergy or at risk from radiation where a CTPA is unsuitable. First, the isotopes are inhaled to fill the lungs and a picture is taken to demonstrate ventilation. Next a contrast containing  isotopes is injected and a picture is taken to demonstrate perfusion. The two pictures are then compared. With a pulmonary embolism there will be a deficit in perfusion as the thrombus blocks blood flow to the lung tissue. This area of lung tissue will be ventilated but not perfused.

The initial management guidelines from NICE were updated in March 2020. The initial recommended treatment is apixaban or rivaroxaban.  Low molecular weight heparin (LMWH) is an alternative where these are not suitable, or in antiphospholipid syndrome. It should be started immediately before confirming the diagnosis in patients where DVT or PE is suspected and there is a delay in getting the scan. Examples are enoxaparin and dalteparin.

The options for long term anticoagulation in VTE are warfarin, a NOAC or LMWH.

The target INR for warfarin is 2-3. When switching to warfarin continue LMWH for 5 days or the INR is 2-3 for 24 hours on warfarin (whichever is longer).

Where there is a massive PE with haemodynamic compromise there is a treatment option called thrombolysis. Thrombolysis involves injecting a fibrinolytic medication (they break down fibrin) that rapidly dissolves clots. There is a significant risk of bleeding which can make it dangerous. It is only used in patients with a massive PE where the benefits outweigh the risks. Some examples of thrombolytic agents are streptokinase, alteplase and tenecteplase.

There are two ways thrombolysis can be performed: