Chronic obstructive pulmonary disease (COPD) is a non-reversible, long term deterioration in air flow through the lungs caused by damage to lung tissue. This lung damage is almost always the result of smoking. The damage to the lung tissues causes an obstruction to the flow of air through the airways making it more difficult to ventilate the lungs and making them prone to developing infections. 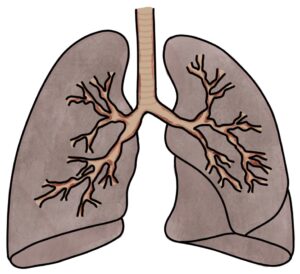 Unlike asthma, this obstruction is not significantly reversible with bronchodilators such as salbutamol. Patients are susceptible to exacerbations during which there is worsening of their lung function. Exacerbations are often triggered by infections and these are called infective exacerbations.

Always consider differential diagnoses such as lung cancer, fibrosis or heart failure. COPD does NOT cause clubbing. It is unusual for it to cause haemoptysis (coughing up blood) or chest pain. These symptoms should be investigated for a different cause.

This is a 5 point scale that NICE recommend for assessing the impact of their breathlessness:

Diagnosis is based on clinical presentation plus spirometry.

The severity of the airflow obstruction can be graded using the FEV1:

There are a number of other investigations that can be considered to help with diagnosis and management and to exclude other conditions:

It is essential for people to stop smoking. Continuing to smoke will progressively worsen their lung function and prognosis. They can be referred to smoking cessation services for support to stop.

Patients should have the pneumococcal and annual flu vaccine.

If they do not have asthmatic or steroid responsive features they should have a combined long acting beta agonist (LABA) plus a long acting muscarinic antagonist (LAMA). “Anoro Ellipta”, “Ultibro Breezhaler” and “DuaKlir Genuair” are examples of combination inhalers.

Long term oxygen therapy is used for severe COPD that is causing problems such as chronic hypoxia, polycythaemia, cyanosis or heart failure secondary to pulmonary hypertension (cor pulmonale). It can’t be used if they smoke as oxygen plus cigarettes is a significant fire hazard.

An exacerbation of COPD presents as acute worsening of symptoms such as cough, shortness of breath, sputum production and wheeze. It is usually triggered by a viral or bacterial infection.

Remember that CO2 makes blood acidotic by breaking down into carbonic acid (H2CO3). Low pH (acidosis) with a raised pCO2 suggests they are acutely retaining (not able to get rid of) more CO2 and their blood has become acidotic. This is a respiratory acidosis.

Raised bicarbonate indicates they chronically retain CO2 and their kidneys have responded by producing more bicarbonate to balance the acidic CO2 and maintain a normal pH. In an acute exacerbation, the kidneys can’t keep up with the rising level of CO2 so they become acidotic despite having a higher bicarbonate than someone without COPD.

It is important to distinguish the type of respiratory failure:

Too much oxygen in someone that is prone to retaining CO2 can depress their respiratory drive. This slows down their breathing rate and effort and leads to them retaining more CO2. Therefore in someone who retains CO2 the amount of oxygen that is given needs to be carefully balanced to optimise their pO2 whilst not increasing their pCO2. This is guided by oxygen saturations and repeat ABGs.

Venturi masks are designed to deliver a specific percentage concentration of oxygen. They allow some of the oxygen to leak out of the side of the mask and normal air to be inhaled along with oxygen. This means the percentage of inhaled oxygen can be carefully controlled to balance how much oxygen they get. Environmental air contains 21% oxygen. Venturi masks deliver 24% (blue), 28% (white), 31% (orange), 35% (yellow), 40% (red) and 60% (green) oxygen.

A general rule regarding target oxygen saturations in COPD is:

Medical Treatment of an Exacerbation

Typical treatment if they are well enough to remain at home:

Options in severe cases not responding to first line treatment: