There are a number of conditions that can cause abnormally shaped or sized pupils. The pupil is formed by a hole in the centre of the iris.

There are circular muscles in the iris that cause pupil constriction. They are stimulated by the parasympathetic nervous system using acetylcholine as a neurotransmitter. The fibres of the parasympathetic system innervating the eye travel along the oculomotor (third cranial) nerve.

The dilator muscles of the pupil arranged like spokes on a bicycle wheel travelling straight from the inside to the outside of the iris. They are stimulated by the sympathetic nervous system using adrenalin as a neurotransmitter.

Trauma to the sphincter muscles in the iris can cause an irregular pupil. This could be caused by cataract surgery and other eye operations.

Anterior uveitis can cause adhesions (scar tissue) in the iris that make the pupils misshapen.

Acute angle closure glaucoma can cause ischaemic damage to the muscles of the iris causing an abnormal pupil shape, usually a vertical oval.

Rubeosis iridis (neovascularisation in the iris) can distort the shape of the iris and pupil. This is usually associated with poorly controlled diabetes and diabetic retinopathy.

Coloboma is a congenital malformation in the eye. This can cause a hole in the iris causing an irregular pupil shape.

Tadpole pupil is where there is spasm in a segment of the iris causing a misshapen pupil. This is usually temporary and associated with migraines.

The third cranial nerve is the oculomotor nerve. It supplies all of the extraocular muscles except the lateral rectus and superior oblique. Therefore when these muscles are no longer getting signals from the oculomotor nerve, the eyes moves outward and downward due to the effects of the lateral rectus and superior oblique still functioning without resistance.

It also supplies the levator palpebrae superioris, which is responsible for lifting the upper eyelid. Therefore third nerve palsy causes a ptosis.

Causes of a Third Nerve Palsy

Third nerve palsy can be idiopathic, without a clear cause.

A third nerve palsy with sparing of the pupil suggests a microvascular cause as the parasympathetic fibres are spared. This may be due to:

A full third nerve palsy is caused by compression of the nerve, including the parasympathetic fibres. This is called a “surgical third” due to the physical compression:

Horner syndrome is a triad of: 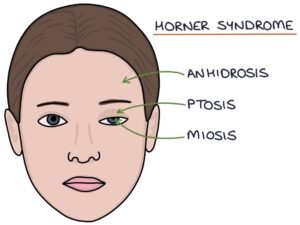 They may also have enopthalmos, which is a sunken eye. Light and accommodation reflexes are not affected.

Horner syndrome is caused by damage to the sympathetic nervous system supplying the face.

The causes can be remembered as the 4 Ss, 4 Ts and 4 Cs. S for Sentral, T for Torso (pre-ganglionic) and C for Cervical (post-ganglionic).

Congenital Horner syndrome is associated with heterochromia, which is a difference in the colour of the iris on the affected side.

Cocaine eye drops can be used to test for Horner syndrome. Cocaine acts on the eye to stop noradrenalin re-uptake at the neuromuscular junction. This causes a normal eye to dilate because there is more noradrenalin stimulating the dilator muscles of the iris. In Horner syndrome, the nerves are not releasing noradrenalin to start with so blocking re-uptake does not make a difference and there is no reaction of the pupil.

A Holmes Adie pupil is a unilateral dilated pupil that is sluggish to react to light with slow dilation of the pupil following constriction. Over time the pupil will get smaller. This is caused by damage to the post-ganglionic parasympathetic fibres. The exact cause is unknown but may be viral.

Holmes Adie Syndrome is where there is a Holmes Adie pupil with absent ankle and knee reflexes.