The most common cause of occlusion of the retinal artery is atherosclerosis. It can also be caused by giant cell arteritis, where vasculitis affecting the ophthalmic or central retinal artery causes reduced blood flow.

Risk factors for retinal artery occlusion by atherosclerosis are the same as for other cardiovascular diseases:

There will be a relative afferent pupillary defect. This is where the pupil in the affected eye constricts more when light is shone in the other eye compared when it is shone in the affected eye. This occurs because the input is not being sensed by the ischaemic retina when testing the direct light reflex but is being sensed by the normal retina during the consensual light reflex.

Fundoscopy will show a pale retina with a cherry-red spot. The retina is pale due to a lack of perfusion with blood. The cherry-red spot is the macula, which has a thinner surface that shows the red coloured choroid below and contrasts with the pale retina. 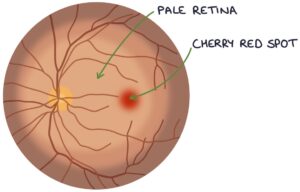 Patients with suspected central retinal artery occlusion should be referred immediately to an ophthalmologist for assessment and management.

Giant cell arteritis is an important potentially reversible cause. Therefore older patients are tested and treated for this if suspected. Testing involves an ESR and temporal artery biopsy and treatment is with high dose steroids (i.e. prednisolone 60mg).

If the patient presents shortly after symptoms develop then there are certain things that can be tried to attempt and dislodge the thrombus. None of these have a strong evidence base. Some examples are: