Stroke is also referred to as cerebrovascular accident (CVA). 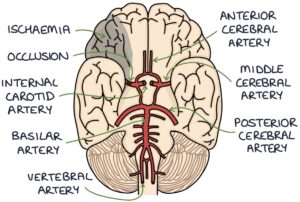 Cerebrovascular accidents are either:

Disruption of blood supply can be caused by:

Transient ischaemic attack (TIA) was originally defined as symptoms of a stroke that resolve within 24 hours. It has been updated based on advanced imaging to now be defined as transient neurological dysfunction secondary to ischaemia without infarction.

Transient ischaemic attacks often precede a full stroke. A crescendo TIA is where there are two or more TIAs within a week. This carries a high risk of developing in to a stroke.

In neurology, suspect a vascular cause where there is a sudden onset of neurological symptoms.

FAST Tool for Identifying a Stroke in the Community

ROSIER Tool for Recognition Of Stroke In Emergency Room

ROSIER is a clinical scoring tool based on clinical features and duration. Stroke is likely if the patient scores anything above 0.

This is adapted from the NICE guidelines updated in 2017 to help your learning. See the full guidelines before treating patients.

Thrombolysis with alteplase can be used after the CT brain scan has excluded an intracranial haemorrhage. Alteplase is a tissue plasminogen activator that rapidly breaks down clots and can reverse the effects of a stroke if given in time. It is given based on local protocols by an experienced physician. It needs to be given within a defined window of opportunity, for example 4.5 hours. Patients need monitoring for post thrombolysis complications such as intracranial or systemic haemorrhage. This includes using repeated CT scans of the brain.

Thrombectomy (mechanical removal of the clot) may be offered if an occlusion is confirmed on imaging, depending on the location and the time since the symptoms started. It is not used after 24 hours since the onset of symptoms.

Generally, blood pressure should not be lowered during a stroke because this risks reducing the perfusion to the brain.

Start aspirin 300mg daily. Start secondary prevention measures for cardiovascular disease. They should be referred and seen within 24 hours by a stroke specialist.

The aim of imaging is to establish the vascular territory that is affected. It is guided by specialist assessment.

Diffusion-weighted MRI is the gold standard imaging technique. CT is an alternative.

Once patients have had a stroke they require a period of adjustment and rehabilitation. This is essential and central to stroke care. It involves a multidisciplinary team including: