Parkinson’s disease is a condition where there is a progressive reduction of dopamine in the basal ganglia of the brain, leading to disorders of movement. The symptoms are characteristically asymmetrical, with one side affected more than the other.

There is a classic triad of features in Parkinson’s disease:

The basal ganglia are a group of structures situated in the middle of the brain. They is responsible for coordinating habitual movements such as walking or looking around, controlling voluntary movements and learning specific movement patterns. Part of the basal ganglia called the substantia nigra produces a neurotransmitter called dopamine. Dopamine is essential for the correct functioning of the basal ganglia. In Parkinson’s disease, there is a gradual but progressive fall in the production of dopamine.

The typical patient is an older aged man around the age of 70. 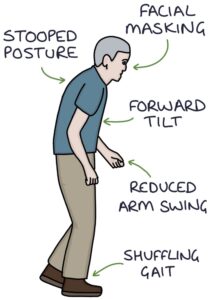 The tremor in Parkinsons has a frequency of 4-6 Hz, meaning it occurs 4-6 times a second. This is described as a “pill rolling tremor” because it looks like they are rolling a pill between their fingertips and thumb. It is more pronounced when resting and improves on voluntary movement. The tremor is worsened if the patient is distracted. Asking them to do a task with the other hand, such as miming the motion of painting a fence, can exaggerate the tremor.

Rigidity is a resistance to passive movement of a joint. If you take their hand and passively flex and extend their arm at the elbow, you will feel a tension in their arm that gives way to movement in small increments (like little jerks). This is what leads to the cogwheel description.

Bradykinesia describes how their movements get slower and smaller. This presents in a number of ways:

There are a number of other features that often affect patients with Parkinson’s disease:

TOM TIP: A common exam task challenges you to distinguish between the tremor of Parkinson’s disease and benign essential tremor. The table below gives some tips on this:

This is a type of dementia associated with features of Parkinsonism. It causes a progressive cognitive decline. There are associated symptoms of visual hallucinations, delusions, disorders of REM sleep and fluctuating consciousness.

Parkinson’s disease is diagnosed clinically based on symptoms and examination. The diagnosis should be made by a specialist with experience in diagnosing Parkinson’s. NICE recommend using the UK Parkinson’s Disease Society Brain Bank Clinical Diagnostic Criteria.

Treatment is initiated and guided by a specialist, and is tailored to each individual patient and their response to different medications. There is no cure, so treatment is focused on controlling symptoms and minimising side effects.

This is synthetic dopamine given orally to boost their own dopamine levels. It is usually combined with a drug that stops levodopa being broken down in the body before it gets the chance to enter the brain. These are peripheral decarboxylase inhibitors. Examples are carbidopa and benserazide.

Levodopa is the most effective treatment for symptoms but becomes less effective over time. It is often reserved for when other treatments are not managing to control symptoms.

The main side effect of dopamine is when the dose is too high patients develop dyskinesias. Theses are abnormal movements associated with excessive motor activity. Examples are:

The main example of this is entacapone. These are inhibitors of catechol-o-methyltransferase  (COMT). The COMT enzyme metabolises levodopa in both the body and brain. Entacapone is taken with levodopa (and a decarboxylase inhibitor) to slow breakdown of the levodopa in the brain. It extends the effective duration of the levodopa.

These mimic dopamine in the basal ganglia and stimulate the dopamine receptors. They are less effective than levodopa in reducing symptoms. They are usually used to delay the use of levodopa and are then used in combination with levodopa to reduce the dose of levodopa that is required to control symptoms. One notable side effect with prolonged use is pulmonary fibrosis. Examples are:

Monoamine oxidase enzymes break down neurotransmitters such as dopamine, serotonin and adrenaline. The monoamine oxidase-B enzyme is more specific to dopamine and does not act on serotonin or adrenalin. These medications block this enzyme and therefore help increase the circulating dopamine. Similarly to dopamine agonists, they are usually used to delay the use of levodopa and then in combination with levodopa to reduce the required dose. Examples are: