Progressive bulbar palsy is the second most common form of motor neurone disease. It affects primarily the muscles of talking and swallowing.

Other types of motor neurone disease to be aware of are progressive muscular atrophy and primary lateral sclerosis.

There is a progressive degeneration of both upper and lower motor neurones. The sensory neurones are spared.

The exact cause is unclear although several mechanisms have been considered. There is a genetic component and many genes have been linked with an increased risk of developing the condition. Taking a good family history is important as around 5-10% of cases are inherited. There also seems to be an increased risk with smoking, exposure to heavy metals and certain pesticides.

The typical patient is a late middle aged (e.g. 60) man, possibly with an affected relative. There is an insidious, progressive weakness of the muscles throughout the body affecting the limbs, trunk, face and speech. The weakness is often first noticed in the upper limbs. There may be increased fatigue when exercising. They may complain of clumsiness, dropping things more often or tripping over. They can develop slurred speech (dysarthria). 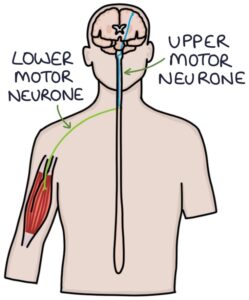 The diagnosis of motor neurone disease needs to be made very carefully. It is based on the clinical presentation and excluding other conditions that can cause motor neurone symptoms. It should only be made by a specialist when there is certainty. Unfortunately, the diagnosis is often delayed, which causes considerable anxiety and stress.

Unfortunately, there are no effective treatments for halting or reversing the progression of the disease.

Riluzole can slow the progression of the disease and extend survival by a few months in ALS. It is licensed in the UK and should be initiated by a specialist.

Edaravone is currently used in the United States but not the UK. Recent studies suggest it has the potential to slow the progression of the disease and it may come in to use in the future.

The key to management of the condition is supporting the person and their family.