Huntington’s chorea is an autosomal dominant genetic condition that causes a progressive deterioration in the nervous system. Patients are usually asymptomatic until symptoms begin around aged 30 to 50.

Huntington’s chorea is a “trinucleotide repeat disorder” that involves a genetic mutation in the HTT gene on chromosome 4. 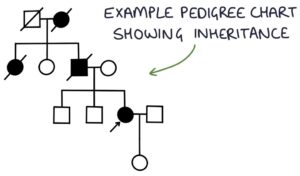 Huntington’s chorea displays something called genetic “anticipation”. Anticipation is a feature of trinucleotide repeat disorders. This is where successive generations have more repeats in the gene, resulting in:

TOM TIP: Anticipation is a common topic of exam questions. It is worth remembering the features and connection with Huntington’s for your exams.

Huntington’s chorea usually presents with an insidious, progressive worsening of symptoms. It typically begins with cognitive, psychiatric or mood problems. These are followed by the development of movement disorders.

Diagnosis is made in a specialist genetic centre using a genetic test for the faulty gene. It involves pre-test and post-test counselling regarding the implications of the results.

There are currently no treatment options for slowing or stopping the progression of the disease.

The key to management of the condition is supporting the person and their family.

Medical treatment is based on symptomatic relief. As the disease progresses medication requirements may change. It is important to discontinue unnecessary medication to minimise adverse effects.

Medications that can suppress the disordered movement:

Depression can be treated with antidepressants.

Huntington’s chorea is a progressive condition. Life expectance is around 15-20 years after the onset of symptoms. As the disease progresses patients become more susceptible and less able to fight off illnesses. Death is often due to respiratory disease (e.g. pneumonia). Suicide is a more common cause of death than in the general population.