Epilepsy is an umbrella term for a condition where there is a tendency to have seizures. Seizures are transient episodes of abnormal electrical activity in the brain. There are many different types of seizures.

A diagnosis of epilepsy is made by a specialist based on the characteristics of the seizure episodes.

An electroencephalogram (EEG) can show typical patterns in different forms of epilepsy and support the diagnosis.

An MRI brain can be used to visualise the structure of the brain. It is used to diagnose structural problems that may be associated with seizures and other pathology such as tumours.

Other investigations can be used to exclude other pathology, particularly an ECG to exclude problems in the heart. 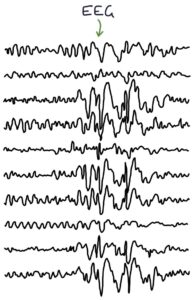 These are what most people think of with an epileptic seizure. There is loss of consciousness and tonic (muscle tensing) and clonic (muscle jerking) episodes. Typically the tonic phase comes before the clonic phase. There may be associated tongue biting, incontinence, groaning and irregular breathing.

After the seizure there is a prolonged post-ictal period where the person is confused, drowsy and feels irritable or depressed.

Management of tonic-clonic seizures is with:

Focal seizures start in temporal lobes. They affect hearing, speech, memory and emotions. There are various ways that focal seizures can present:

One way to remember the treatment is that they are the reverse of tonic-clonic seizures:

Absence seizures typically happen in children. The patient becomes blank, stares into space and then abruptly returns to normal. During the episode they are unaware of their surroundings and won’t respond. These typically only lasts 10-20 seconds. Most patients (> 90%) stop having absence seizures as they get older. Management is:

Atonic seizures are also known as “drop attacks”. They are characterised by brief lapses in muscle tone. These don’t usually last more than 3 minutes. They typically begin in childhood. They may be indicative of Lennox-Gastaut syndrome. Management is:

Myoclonic seizures present as sudden brief muscle contractions, like a sudden “jump”. The patient usually remains awake during the episode. They occur in various forms of epilepsy but typically happen in children as part of juvenile myoclonic epilepsy. Management is:

This is also known as West syndrome. It is a rare (1 in 4000) disorder starting in infancy at around 6 months of age. It is characterised by clusters of full body spasms. There is a poor prognosis: 1/3 die by age 25, however 1/3 are seizure free. It can be difficult to treat but first line treatments are:

This is a first line option for most forms of epilepsy (except focal seizures). It works by increasing the activity of GABA, which has a relaxing effect on the brain. Notable side effects:

There are a lot of warning about the teratogenic effects of sodium valproate and NICE updated their guidelines in 2018 to reflect this. It must be avoided in girls or women unless there are no suitable alternatives and strict criteria are met to ensure they do not get pregnant.

This is first line for focal seizures. Notable side effects are:

Status epilepticus is an important condition you need to be aware of and how to treat. It is a medical emergency. It is defined as seizures lasting more than 5 minutes or more than 3 seizures in one hour.

Management of status epileptics in the hospital:

Medical options in the community: