Bacteria are single celled organisms. They come in many shapes and sizes. Most bacteria are not harmful however some are pathogenic and cause infectious diseases. These pathogenic bacteria are the most relevant to learning medicine.

They can be categorised into aerobic and anaerobic, gram positive and gram negative and atypical bacteria. Learning where bacteria fall within these categories helps you work out which antibiotics will be effective against them. 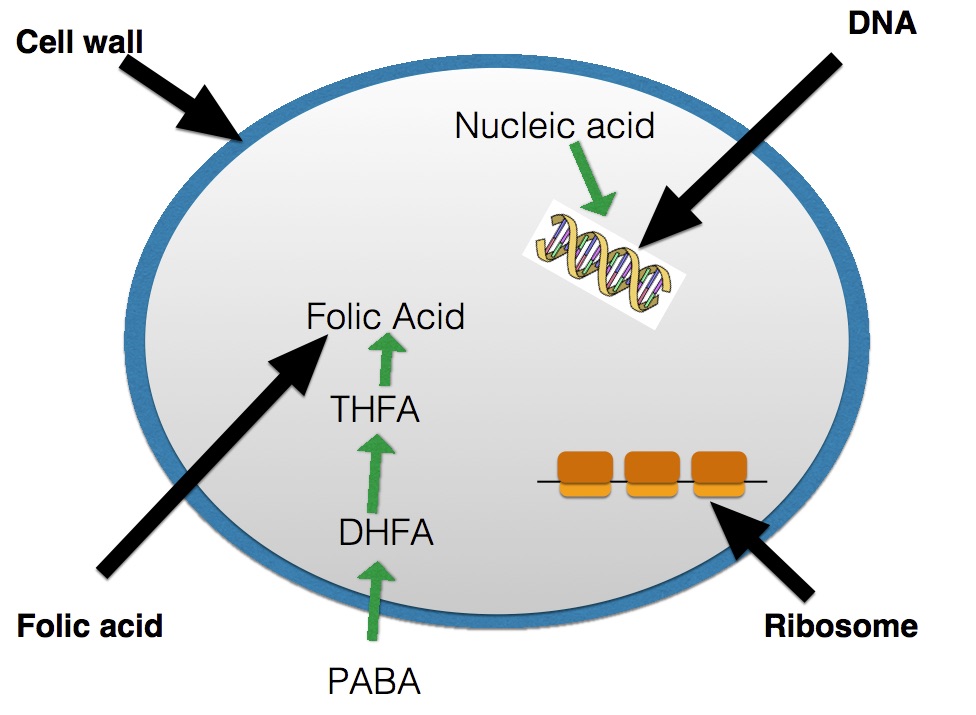 There are some key components to learn about as they are the target of antibiotic treatment:

The cell wall is a structure that surrounds the outer cell membrane and is found on gram positive bacteria.

Ribosomes are where bacteria proteins are synthesised within the bacterial cell.

Folic acid is essential for synthesis and regulation of DNA within the bacteria. Folic acid cannot be created or directly imported into the cell and requires a chain of intermediates to get in to the cell. This chain starts with PABA, which is directly absorbed in to the cell across the cell membrane. PABA is then converted to DHFA which is converted inside the cell to THFA then folic acid.

A gram stain is used as a quick way to check a sample under the microscope to look for bacteria. It involves two main steps:

Add a crystal violet stain which binds to molecules in the thick peptidoglycan cell wall in gram positive bacteria turning them violet.

Then add a counterstain (such as safranin) which binds to the cell membrane in bacteria that don’t have a cell wall (gram negative bacteria) turning them red/pink. 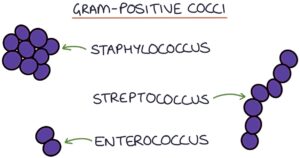 Use the mnemonic “corney Mike’s list of basic cars”:

Use the mnemonic “CLAP”:

The definition of atypical bacteria is that they cannot be cultured in the normal way or detected using a gram stain. Atypical bacteria are most often implicated in pneumonia.

The atypical bacteria that cause atypical pneumonia can be remembered using the mnemonic “legions of psittaci MCQs”:

MRSA refers to staphylococcus aureus bacteria that have become resistant to beta-lactam antibiotics such as penicillins, cephalosporins and carbapenems.

They are a problem in healthcare settings where antibiotics are commonly used. Think about MRSA in patients that have had hospital admissions or come from a nursing home or other healthcare institution.

People are often colonised with MRSA bacteria and have them living harmlessly on their skin and respiratory tract. If these bacteria become part of an infection they can be difficult to treat. Patients being admitted for surgery or treatment are screened for MRSA infection by taking nasal and groin swabs so that extra measures can be taken to try to eradicate them and stop their spread. Eradication usually involves a combination of chlorhexidine body washes and antibacterial nasal creams.

Antibiotic treatment options for MRSA are:

ESBLs are bacteria that have developed resistance to beta-lactam antibiotics. They produce beta lactamase enzymes that destroy the beta-lactam ring on the antibiotic. They can be resistant to a very broad range of antibiotics.

ESBLs tend to be e. coli or klebsiella and typically cause urinary tract infections but can also cause other infections such as pneumonia.

They are usually sensitive to carbapenems such as meropenem or imipenem.