Blood is made up of plasma (the liquid of the blood) that contains red blood cells, white blood cells and platelets. The plasma also contains lots of clotting factors such as fibrinogen.

Once the clotting factors are removed from the blood what is left is called the serum. Serum contains:

Blood cells develop in the bone marrow. Bone marrow is mostly found in the pelvis, vertebrae, ribs and sternum. It is important to understand the different cell lines to understand the conditions where things go wrong with these cells. I strongly suggest watching the Zero to Finals video on “understanding the cells of the immune system” to get your head around the development of blood cells in the bone marrow. 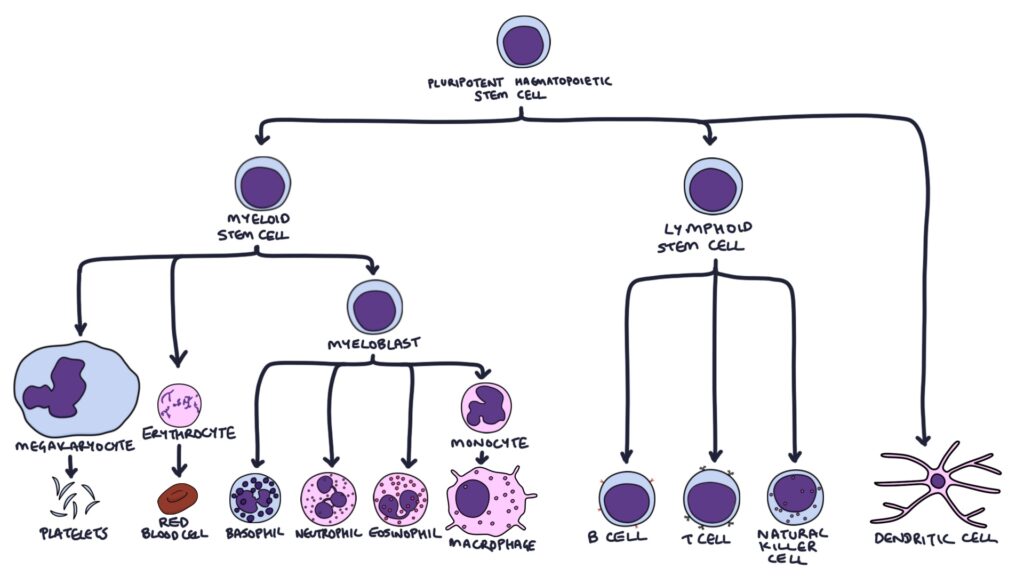 These are undifferentiated cells that have the potential to transform into a variety of blood cells. They initially become:

Platelets are made by megakaryocytes. Their lifespan is 10 days. The normal count is 150000 – 450000 /mm3. Their role is to clump together (platelet aggregation) and plug gaps where blood clots need to form.

Lymphocytes come from the lymphoid stem cells and become B cells or T cells.

B lymphocytes (B cells) (mature in the bone marrow) and differentiate into:

T lymphocytes (T cells) (mature in the thymus gland) and differentiate into:

A blood film involves a specialist examining the blood using a microscope to manually check for abnormal shapes, sizes and contents of the cells and note abnormal inclusions in the blood. Exam questions will often say “… was seen on a blood film” to give you a clue about the diagnosis. There are a lot of possible findings on a blood film but the key ones worth knowing for your exams are included below.

Anisocytosis refers to a variation in size of the red blood cells. These can be seen in myelodysplasic syndrome as well as some forms of anaemia.

Heinz Bodies are individual blobs seen inside red blood cells caused by denatured globin. They can be seen in G6PD and alpha-thalassaemia.

Reticulocytes are immature red blood cells that are slightly larger than standard erythrocytes (RBCs) and still have RNA material in them. The RNA has a reticular (“mesh like”) appearance inside the cell. It is normal to have about 1% of red blood cells as reticulocytes. This percentage goes up where there is rapid turnover of red blood cells, such as haemolytic anaemia. They demonstrate that the bone marrow is active in replacing lost cells.

Schistocytes are fragments of red blood cells. They indicate the red blood cells are being physically damaged by trauma during their journey through the blood vessels. They may indicate networks of clots in small blood vessels caused by haemolytic uraemic syndrome, disseminated intravascular coagulation (DIC) or thrombotic thrombocytopenia purpura. They can also be present in replacement metallic heart valves and haemolytic anaemia.

Sideroblasts are immature red blood cells that contain blobs of iron. They occur when the bone marrow is unable to incorporate iron into the haemoglobin molecules. They can indicate a myelodysplasic syndrome.

Smudge cells are ruptured white blood cells that occur during the process of preparing the blood film due to aged or fragile white blood cells. They can indicate chronic lymphocytic leukaemia.