Peptic ulcers involve ulceration of the mucosa of the stomach (gastric ulcer) or the duodenum (duodenal ulcer). Duodenal ulcers are more common. 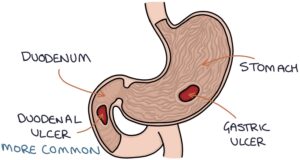 The stomach mucosa is prone to ulceration from:

Increased acid can result from:

TOM TIP: In your MCQ exams, eating typically worsens the pain of gastric ulcers and improves the pain of duodenal ulcers. 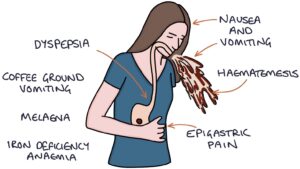 Peptic ulcers are diagnosed by endoscopy. During endoscopy a rapid urease test (CLO test) can be performed to check for H. pylori. Biopsy should be considered during endoscopy to exclude malignancy as cancers can look similar to ulcers during the procedure.

Medical treatment is the same as with GORD, usually with high dose proton pump inhibitors. Endoscopy can be used to monitoring the ulcer to ensure it heals and to assess for further ulcers.

Bleeding from the ulcer is a common and potentially life threatening complication.

Scarring and strictures of the muscle and mucosa. This can lead to a narrowing of the pylorus (the exit of the stomach) causing difficulty in emptying the stomach contents. This is known as pyloric stenosis. This presents with upper abdominal pain, distention, nausea and vomiting, particularly after eating. 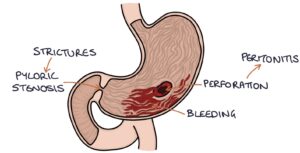