Coeliac disease is an autoimmune condition where exposure to gluten causes an autoimmune reaction that causes inflammation in the small bowel. It usually develops in early childhood but can start at any age.

In coeliac disease, auto-antibodies are created in response to exposure to gluten that target the epithelial cells of the intestine and lead to inflammation. There are two antibodies to remember: anti-tissue transglutaminase (anti-TTG) and anti-endomysial (anti-EMA). These antibodies relate to disease activity and will rise with more active disease and may disappear with effective treatment.

Inflammation affects the small bowel, particularly the jejunum. It causes atrophy of the intestinal villi. The intestinal cells have villi on them that help with absorbing nutrients from the food passing through the intestine. The inflammation causes malabsorption of nutrients and the symptoms of the disease. 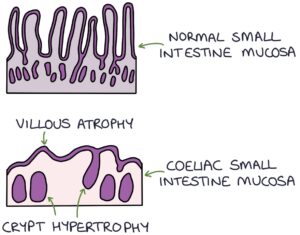 TOM TIP: Remember for your exams that we test all new cases of type 1 diabetes even if they don’t have symptoms as the conditions are often linked.

Investigations must be carried out whilst the patient remains on a diet containing gluten otherwise it may not be possible to detect antibodies or inflammation in the bowel.

Coeliac disease is associated with many other autoimmune conditions:

Lifelong gluten-free diet is essentially curative. Relapse will occur on consuming gluten again. Checking coeliac antibodies can be helpful in monitoring the disease.