Hypothyroidism is the term used to describe an inadequate output of thyroid hormones by the thyroid gland. 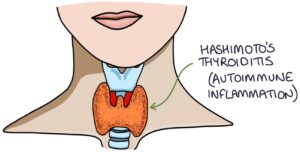 This is the most common cause of hypothyroidism in the developing world. Iodine is added to foods such as table salt to prevent iodine deficiency.

Secondary to Treatment of Hyperthyroidism

All of the treatments for hyperthyroidism have the potential to cause hypothyroidism:

This is where the pituitary gland is failing to produce enough TSH. This is often associated with a lack of other pituitary hormones such as ACTH. This is called hypopituitarism and has many causes:

Primary Hypothyroidism is caused by thyroid gland insufficiency. Thyroid hormones (i.e. free T3 and T4) will be low. TSH will be high because there is no negative feedback to the brain, so the pituitary produces lots of TSH to try and get the thyroid working.

Secondary Hypothyroidism is caused by pituitary pathology that results in low production of TSH. Thyroid hormones will be low due to the low TSH.

Replacement of thyroid hormone with oral levothyroxine is the treatment of hypothyroidism. Levothyroxine is synthetic T4, and metabolises to T3 in the body. The dose is titrated until TSH levels are normal. When starting levothyroxine, initially measure TSH levels monthly until stable, then once stable it can be checked less frequently unless they become symptomatic.