Tetralogy of Fallot is a congenital condition where there are four coexisting pathologies: 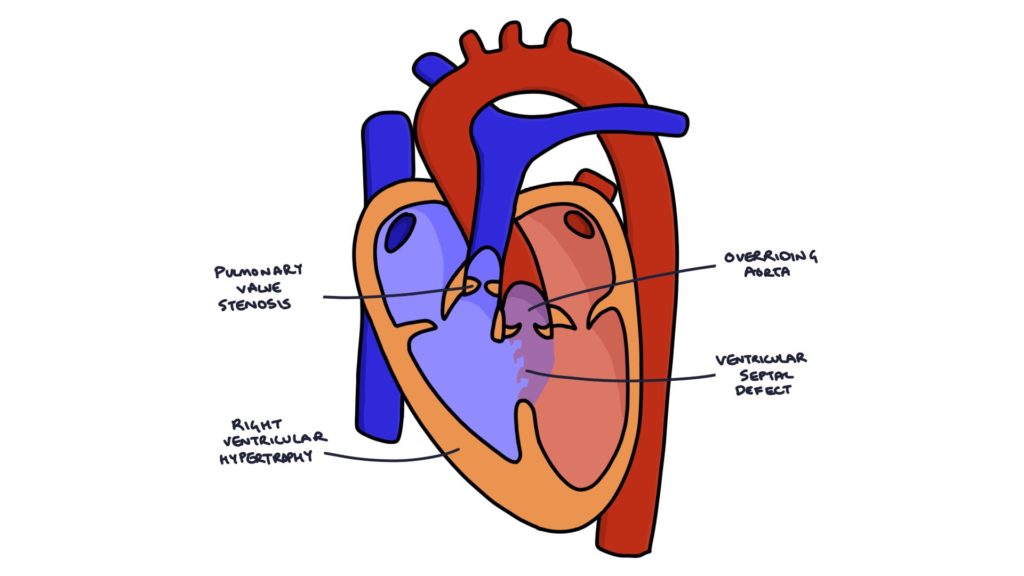 The VSD allows blood to flow between the ventricles. The term “overriding aorta” refers to the fact that the entrance to the aorta (the aortic valve) is placed further to the right than normal, above the VSD. This means that when the right ventricle contracts and sends blood upwards, the aorta is in the direction of travel of that blood, therefore a greater proportion of deoxygenated blood enters the aorta from the right side of the heart.

The increased strain on the muscular wall of the right ventricle as it attempts to pump blood against the resistance of the left ventricle and pulmonary stenosis causes right ventricular hypertrophy, with thickening of the heart muscle.

These cardiac abnormalities cause a right to left cardiac shunt. This means blood bypasses the child’s lungs.  Blood bypassing the lungs does not become oxygenated. Deoxygenated blood entering the systemic circulation causes cyanosis. The degree to which this happens is related mostly to the severity of the patients pulmonary stenosis.

As with all structural congenital cardiac abnormalities, an echocardiogram is the investigation of choice for establishing the diagnosis. During the echocardiogram, the machine can produce coloured pictures that demonstrate the direction of flow of blood. This is called doppler flow studies. This is useful in assessing the severity of the abnormality and shunt.

A chest xray may show the characteristic “boot shaped” heart due to right ventricular thickening. This not particularly useful diagnostically except during medical exams.

Most cases are picked up before the child is born during the antenatal scans. Additionally, an ejection systolic murmur caused by the pulmonary stenosis may be heard on the newborn baby check.

Severe cases will present with heart failure before one year of age. In milder cases, they can present as older children once they start to develop signs and symptoms of heart failure.

“Tet Spells” are intermittent symptomatic periods where the right to left shunt becomes temporarily worsened, precipitating a cyanotic episode. This happens when the pulmonary vascular resistance increases or the systemic resistance decreases. For example, if the child is physically exerting themselves they are generating a lot of carbon dioxide. Carbon dioxide is a vasodilator that causes systemic vasodilation and therefore reduces the systemic vascular resistance. Blood flow will choose the path of least resistance, so blood will be pumped from the right ventricle to the aorta rather than the pulmonary vessels, bypassing the lungs.

These episodes may be precipitated by waking, physical exertion or crying. The child will become irritable, cyanotic and short of breath. Severe spells can lead to reduced consciousness, seizures and potentially death.

Older children may squat when a tet spell occurs. Younger children can be positioned with their knees to their chest. Squatting increases the systemic vascular resistance. This encourages blood to enter the pulmonary vessels.

Any medical management of a tet spell should involve an experienced paediatrician, as they can be potentially life threatening.

In neonates, a prostaglandin infusion can be used to maintain the ductus arteriosus. This allows blood to flow from the aorta back to the pulmonary arteries.

Total surgical repair by open heart surgery is the definitive treatment, however mortality from surgery is around 5%.

Prognosis depends on the severity, however it is poor without treatment. With corrective surgery, 90% of patients will live into adulthood.