Home > Obstetrics and Gynaecology > The Reproductive System > The Menstrual Cycle

The menstrual cycle consists of two phases: the follicular phase and the luteal phase. The follicular phase is from the start of menstruation to the moment of ovulation (the first 14 days in a 28-day cycle). The luteal phase is from the moment of ovulation to the start of menstruation (the final 14 days of the cycle).

From puberty, the ovaries have a finite number of cells that have the potential to develop into eggs. These cells are called oocytes. Granulosa cells surround the oocytes, forming structures called follicles.

Follicles go through four key stages of development in the ovaries:

At the start of the menstrual cycle, FSH stimulates further development of the secondary follicles. As the follicles grow, the granulosa cells that surround them secrete increasing amounts of oestradiol (oestrogen). The oestradiol has a negative feedback effect on the pituitary gland, reducing the quantity of LH and FSH produced. The rising oestrogen also causes the cervical mucus to become more permeable, allowing sperm to penetrate the cervix around the time of ovulation.

One of the follicles will develop further than the others and become the dominant follicle. Luteinising hormone (LH) spikes just before ovulation, causing the dominant follicle to release the ovum (an unfertilised egg) from the ovary. Ovulation happens 14 days before the end of the menstrual cycle, for example, day 14 of a 28-day cycle, or day 16 of a 30-day cycle.

When fertilisation occurs, the syncytiotrophoblast of the embryo secretes human chorionic gonadotrophin (HCG).  HCG maintains the corpus luteum. Without hCG, the corpus luteum degenerates. Pregnancy tests check for hCG to confirm a pregnancy.

Menstruation involves the superficial and middle layers of the endometrium separating from the basal layer. The tissue is broken down inside the uterus, and released via the cervix and vagina. The release of fluid containing blood from the vagina lasts 1 – 8 days. 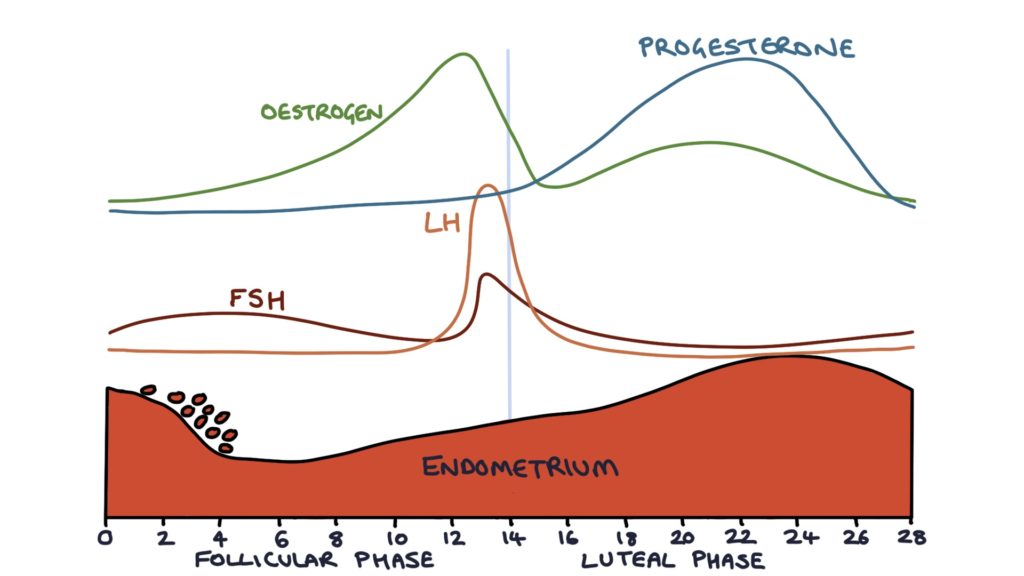