Development of the Embryo

Home > Obstetrics and Gynaecology > The Reproductive System > Development of the Embryo

A week after fertilisation, the implanted blastocyst starts to differentiate into various types of cell. The cells of the embryoblast split in two, with the yolk sac on one side and the amniotic cavity on the other. The embryonic disc sits between the yolk sac and the amniotic cavity. The cells of the embryonic disc develop into the fetal pole, and eventually into the fetus.

Over a short time, a space called the chorionic cavity forms around the yolk sac, embryonic disc and amniotic sac. These structures are suspended from the chorion by the connecting stalk, which will eventually become the umbilical cord. 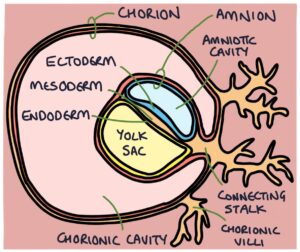 At around five weeks gestation, the embryonic disc develops into a fetal pole containing three layers: the ectoderm (outer layer), mesoderm (middle layer) and endoderm (inner layer). These three layers go on to become all the different tissues of the body.

At around six weeks gestation, the fetal heart forms and starts to beat. The spinal cord and muscles also begin to develop. The embryo (fetal pole) is about 4mm in length.

At around eight weeks gestation, all the major organs have started to develop. From this point onwards the fetus matures and grows until birth.