Lung cancer is the third most common cancer in the UK behind breast and prostate. Cigarette smoking is the biggest cause and around 80% of lung cancers are thought to be preventable. 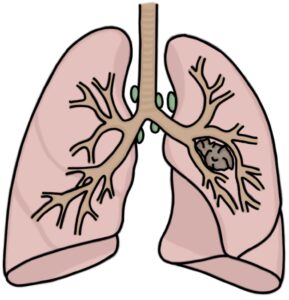 Staging CT scan of chest, abdomen and pelvis to establish the stage and check for lymph node involvement and metastasis. This should be contrast enhanced using an injected contrast to give more detailed information about different tissues.

PET-CT (positron emission tomography) scans involve injecting a radioactive tracer (usually attached to glucose molecules) and taking images using a combination of a CT scanner and a gamma ray detector to visualise how metabolically active various tissues are. They are useful in identifying areas that the cancer has spread to by showing areas of increased metabolic activity suggestive of cancer.

Bronchoscopy with endobronchial ultrasound (EBUS) involves endoscopy of the airways (bronchi) with ultrasound on the end of the scope. This allows for detailed assessment of the tumour and ultrasound guided biopsy.

Histological diagnosis to check the type of cells in the cancer requires a biopsy. This can be either by bronchoscopy or percutaneously (through the skin).

All treatments are discussed at an MDT meeting involving various consultants and specialists, such as pathologists, surgeons, oncologists and radiologists. This is to make a joint decision about what is the most suitable options for the individual patient.

Surgery is offered first line in non-small cell lung cancer to patients that have disease isolated to a single area with intention to cure the cancer. Lobectomy (removing the lung lobe containing the tumour) is first line. Segmentectomy or wedge resection (taking a segment or wedge of lung to remove the tumour) is also an option.

Radiotherapy can also be curative in non-small cell lung cancer when early enough.

Chemotherapy can be offered in addition to surgery or radiotherapy in certain patients to improve outcomes (“adjuvant chemotherapy”) or as palliative treatment to improve survival and quality of life in later stages of non-small cell lung cancer.

Endobronchial treatment with stents or debulking can be used as part of palliative treatment to relieve bronchial obstruction caused by lung cancer.

Lung cancer is associated with a lot of extrapulmonary manifestations and paraneoplastic syndromes. These are linked to different types and distributions of lung cancer and are quite common exam questions asking you to suggest the underlying cause. Sometimes they can be the first evidence of a lung cancer in otherwise asymptomatic patients.

Phrenic nerve palsy due to nerve compression causes diaphragm weakness and presents as shortness of breath.

Superior vena cava obstruction is a complication of lung cancer. It is caused by direct compression of the tumour on the superior vena cava. It presents with facial swelling, difficulty breathing and distended veins in the neck and upper chest. “Pemberton’s sign” is where raising the hands over the head causes facial congestion and cyanosis. This is a medical emergency.

Horner’s syndrome is a triad of partial ptosis, anhidrosis and miosis. It is caused by a Pancoast’s tumour (tumour in the pulmonary apex) pressing on the sympathetic ganglion.

Syndrome of inappropriate ADH (SIADH) caused by ectopic ADH secretion by a small cell lung cancer and presents with hyponatraemia.

Cushing’s syndrome can be caused by ectopic ACTH secretion by a small cell lung cancer.

Limbic encephalitis. This is a paraneoplastic syndrome where the small cell lung cancer causes the immune system to make antibodies to tissues in the brain, specifically the limbic system, causing inflammation in these areas. This causes symptoms such as short term memory impairment, hallucinations, confusion and seizures. It is associated with anti-Hu antibodies.

Patients with Lambert-Eaton have reduced tendon reflexes. A notable finding is that these reflexes become temporarily normal for a short period following a period of strong muscle contraction. For example, the patient can maximally contract the quadriceps muscle for a period, then have their reflexes tested immediately afterwards, and display an improvement in the response. This is called post-tetanic potentiation.

Mesothelioma is a lung malignancy affecting the mesothelial cells of the pleura. It is strongly linked to asbestos inhalation. There is a huge latent period between exposure to asbestos and the development of mesothelioma of up to 45 years. The prognosis is very poor. Chemotherapy can improve survival but it is essentially palliative.