Diabetic retinopathy is a condition where the blood vessels in the retina are damaged by prolonged exposure to high blood sugar levels (hyperglycaemia) causing a progressive deterioration in the health of the retina.

Hyperglycaemia leads to damage to the retinal small vessels and endothelial cells. Increased vascular permeability leads to leakage from the blood vessels, blot haemorrhages and the formation of hard exudates. Hard exudates are yellow/white deposits of lipids in the retina.

Damage to the blood vessel walls leads to microaneurysms and venous beading. Microaneurysms are where weakness in the wall causes small bulges. Venous beading is where the walls of the veins are no longer straight and parallel and look more like a string of beads or sausages.

Intraretinal microvascular abnormalities (IMRA) is where there are dilated and tortuous capillaries in the retina. These can act as a shunt between the arterial and venous vessels in the retina.

Neovascularisation is when growth factors are released in the retina causing the development of new blood vessels. 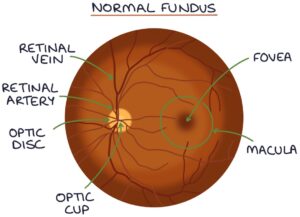 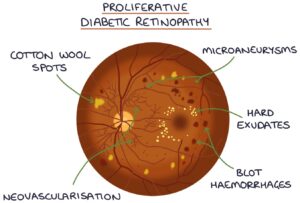 These conditions are classified based on the findings on fundus examination.