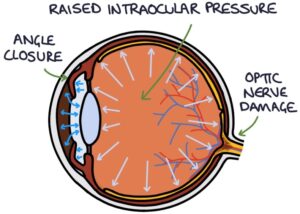 Acute angle-closure glaucoma occurs when the iris bulges forward and seals off the trabecular meshwork from the anterior chamber preventing aqueous humour from being able to drain away. This leads to a continual build-up of pressure in the eye. The pressure builds up particularly in the posterior chamber, which causes pressure behind the iris and worsens the closure of the angle.

The risk factors are slightly different to open-angle glaucoma:

The patient will generally appear unwell in themselves. They have a short history of:

NICE CKS 2019 say patients with potentially life-threatening causes of red eye should be referred for same-day assessment by an ophthalmologist. If there is a delay in admission, whilst waiting for an ambulance:

Pilocarpine acts on the muscarinic receptors in the sphincter muscles in the iris and causes constriction of the pupil. Therefore it is a miotic agent. It also causes ciliary muscle contraction. These two effects cause the pathway for the flow of aqueous humour from the ciliary body, around the iris and into the trabecular meshwork to open up.

Acetazolamide is a carbonic anhydrase inhibitor. This reduces the production of aqueous humour.

Various medical options can be tried to reduce the pressure:

Laser iridotomy is usually required as a definitive treatment. This involves using a laser to make a hole in the iris to allow the aqueous humour to flow from the posterior chamber into the anterior chamber. The relieves pressure that was pushing the iris against the cornea and allows the humour the drain.